The main achievement of European Union was to wipe out the idea itself or war in Europe. But we failed with former Yugoslavia and we are failing with Ukraine.

I’m aware that this note won’t be liked by lots of friends of mines’ in Europe and Italy but if you love somebody you have to show it by always be sincere and not concede to the widespread hypocrisy.

First of all, let me note the too much double standard language and measures have been uttered since the falling of the Iron Curtain.

When Yugoslavia collapsed all the main EU countries raced to recognise the new-born Republics, without asking themselves questions over their sustainability of the minimum requirements for a statehood, e.g. economy, defense, etc.

More recently, the different European political groups have carelessly adjusted their policy on “secession” and on “succession of States” only on the basis of the possible advantages that a new state will bring to their membership, whether we talk Kosovo, Catalunya, Scotland, Moldova or Ukraine.

The same leading EU politicians have also too often misused the tensions accumulating in the “periphery” for short term personal advantages, for example rushing to be the first on the spotlight of Maidan on the eve of the start of the EU electoral campaign instead of sitting with the contenders and trying to find a peaceful and mutually “honorable” solution, taking into account the susceptibility of the “Russian Bear”.

But at the same time:

And, btw, in case of military action, who would go at war for Ukraine? Nobody, I can tell you. So, better not to promise what you cannot maintain, otherwise the only victims would be those enthusiasts who took arm in the past hoping that the Big Powers will come and aide them, like the insurgents of the Warsaw ghetto during WWII, just to discover nobody would move not to jeopardise subtle and delicate geopolitical checks and balances.

Of course, EU has only a partial responsibility in all that mass, being the other main contributor the usual interference of foreign global and regional powers (i.e. USA and Russia) for the sake of their power play heritage of the cold war, which only made the situation getting worse.

And the deaths are in the meantime piling up, while a definitive peaceful solution is only a little more than a wishful thinking. 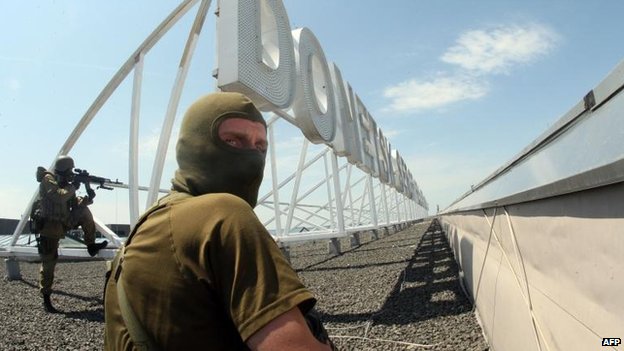